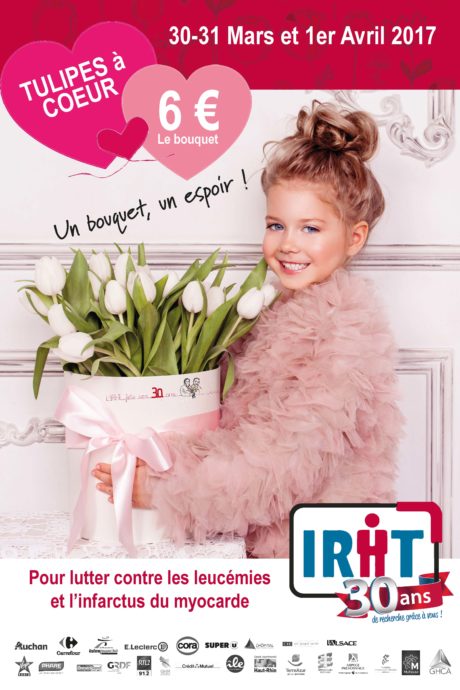 Since 1990, the tulip sale organized every spring by the Institute is financing between 25% and 30% of its annual budget.

This adventure starts when the IRHT was faced with a lack of financial resources. Professor Philippe Hénon then had the idea to ask a group of tradespeople of Mulhouse to donate a small percentage of their turnover to help him continue his work. It was refused but the chairman of this group suggested contacting the Cora Wittenheim a well-known hypermarket of France.

In fact, at this time, Philippe Malandin, director of Cora, proposed selling 2000 bunches of tulips during 3 days to the benefit of the IRHT in his hypermarket.

Philippe Hénon, somewhat disappointed by this proposal, far below what he hoped, planned to extend this sale of tulips to the entire department of the Haut-Rhin, with the help of Cora, which was enthusiastically accepted Mr. Malandin. A plan of action was set up in few weeks, and for this first year 15,200 bouquets were sold.

Pomona, a distribution company, now controls the supply and distribution of bouquets (between 45,000 and 52,000 according to the year) with more than 1,200 volunteers whose work cannot be overemphasized. The bouquets are sold in the Mulhouse area, Colmar area, Sundgau (south of Alsace), Belfort and Montbéliard.

You too, become a volunteer ….

Every year, we are looking for people ready to give a few hours to sell our bouquets of tulips. If you are interested in helping the Mulhouse research, please, don’t hesitate to contact us.