Home | Understand | Who are we? | Our Lifesaving History

1983: Dr. Hénon founded the “Association for Research in Hematology and Transfusion” (ARHT) in Mulhouse, with the help of Dr. Jean Selva, Director of the Blood Transfusion Center (EFS) of Mulhouse

1986: After having demonstrated that hematopoietic stem cells (HSC)can under certain conditions move from the bone marrow to the blood (mobilization) to collected them and constitute a graft, Dr. Hénon’s team is carrying out the 6th blood stem cells transplantation over the world. This technique has now supplanted the “classical” technique of bone marrow transplantation. It is widely used as a therapeutic supplement in leukemia or other cancerous diseases, and has contributed to cures many diseases in the last 30 years.

13 April 1987: Dr. HENON announces by press conference the imminent creation of a medical research center, “technical emanation” of the ARHT, that have been possible with a large donation of 1 million Francs, through the “Fondation de France”.

September 1987: The Institute of Research in Hematology and Transfusion (IRHT), which is still a legal entity of ARHT, is recruiting its first researcher, Dr. Hanna SOVALAT, who will remain there until 2015, the year of her retirement. The IRHT was then “hosted” in the Hematology Central Laboratory of the Mulhouse Hospital, directed by Dr. Hénon.

1990: To fund “its” Research Institute, ARHT is organizing the first “Operation Tulipes” whose revenues are fully allocated to the IRHT researchs.

1990: The ARHT / IRHT is focusing its research on CD34+ stem cells and on a redoubtable disease, multiple myeloma or Kahler’s disease (of which Pompidou -French President- and Bourvil -French actor- died in the past), a form of cancer developing in bone marrow and causing “holes” in the bones, responsible of spontaneous fractures. Nevertheless and even if this disease is still deadly, the IRHT team has greatly contributed to improve life of patients by carrying out the first transplants to the world of CSS in this indication and studying the cancer transformation of normal stem cells.

1991: On 3 January, ARHT become legally recognized as a public interest association by a prefectoral ordinance.

1991-1995: The Lalance Foundation built in 1991 (Laying of the first stone on May 3, 1991) a building of 540m2 located inside the Mulhouse Hospital and dedicated to the IRHT, on a ground made available by the Hospital Center of Mulhouse for 1 symbolic franc. Delivery of the building take place at the end of December. Finally, IRHT integrate its labs one year later, after financing the interior installations and at this time, the building was only partially converted into laboratories and offices, corresponding to the needs of the moment. The inauguration of the new building by the deputy mayor of Mulhouse, Jean-Marie Bockel, and the Prefect of Haut-Rhin, took place on 18 March 1995 in the presence of numerous personalities and volunteers from Operation Tulipes. 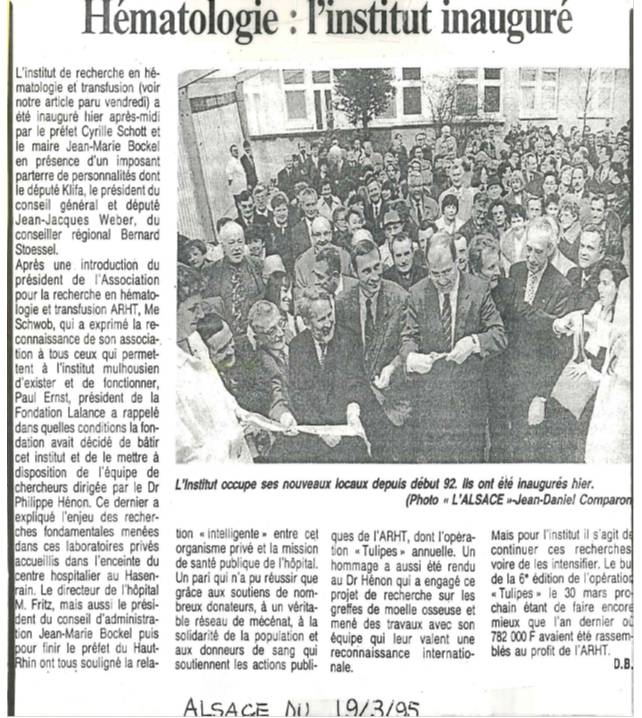 1998: Philippe Hénon and his team publish in the British Journal of Haematology a scientific article defining precisely and for the first time, the subpopulation of CD34 + cells involved in long-term transplantation of blood stem cells.

1999-2000: As the research team grown over the years (from 1 to 3 employees to 12 now), 4 new laboratories are appointed in the basement of the building (with the financial assistance of The Lalance Foundation).

2001: The IRHT team speculates that CD34 + stem cells could possibly “restore” cardiac muscle and/or regenerate small blood vessels. This discovery enabled to propose a revolutionary treatment of myocardial infarction by collecting these cells in the patient’s own blood, purifying them in the laboratory and then reinjecting them directly into the cardiac lesion.

2002: Operation Tulipes, copied throughout France, is labeled and protected with the name “Tulipes à Cœur”.

2002-2006: A pilot clinical trial is being conducted in cooperation with the Cardiac Surgery and Hematology departments of the Mulhouse Hospital to demonstrate, for the first time in the world, that intra-cardiac injection of HSC CD34+ leads to functional Post-myocardial infarction reparation with considerable clinical improvement. This project gave rise to the creation by Philippe Hénon, in 2008, of a biotechnology company named CellProthera which aims to develop, industrialize and disseminate this innovative therapeutic approach throughout the world.

2003: Due to administrative simplification and clarity reasons, the acronym ARHT is definitely replaced by “IRHT”, whose acronym now corresponds to the name: “Institute of Research in Hematology and Transplantation”, the latter word corresponding better to Its actual goals and research.

2012-2015: Due to retirement or leaving for personal reasons of the main researchers, the research team is largely overhauled and rejuvenated.

Since its creation, the IRHT has gained international recognition with more than 150 scientific publications and more than 200 invited lectures or papers in international congresses, the organization of 6 congresses and 3 international workshops, and the publication in English of 3 books on Blood stem cells, which have always represented the main thread of the work carried out by IRHT.

2017: The IRHT celebrates its 30 years of existence and researches. Its founder, Doctor Henon, retires at the end of the year. But adventure continues!